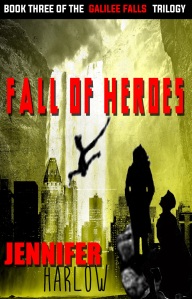 Publisher: Devil on the Left Books
Date of Publication: 10/31/15

“Show me a hero; and I’ll write you a tragedy.” -F. Scott Fitzgerald

Would that the world were that simple. Nothing is ever simple in a world filled with superheroes and villains. She may not wear a cape or have superpowers, but no one would say Joanna Fallon isn’t a hero. At great personal cost she’s saved the city of Galilee Falls from two supervillains, but has finally found a measure of peace. But whatever rises often falls, and even the city’s champion may not be able to fight the cataclysm about to befall not only her city but the whole of the world…or even want to.

Read the conclusion to the critically acclaimed Galilee Falls trilogy from the imagination of the IPPY award winning author Jennifer Harlow.

I swear to fucking Christ, if he’s late for this wedding, a supervillain won’t kill him, I will.

If your boyfriend is the premier superhero in the city with the highest concentration of the super-powered in the country, you get used to situations like this. Dinners where you find yourself sitting alone in a restaurant, cancelled vacations, missing birthdays. I’ve endured them with a smile and forgiveness, but not today. I’ve stressed to him a thousand times how important this day is to me. Just this morning, before my hair appointment, I told him three times. But no, when I got home to put on my dress, he was nowhere to be found. I had to start up the comms on Doris Jr. to track him down. Sure enough he was out in the field fighting Hexen and more of the villains damn zombies at a war reenactment. Still, he swore he’d be here on time. Trust me, he said. Damn superheroes. Guess it’s partially my fault for falling in love with one. Again. I should have learned the first time around. Damn you for being so amazingly brilliant, Jem Ambrose. Damn you.

“What are you still doing out here?” my old partner Cam, Detective Terrence Cameron to you, says behind me. I spin around just as he reaches me on the bottom of the church steps. He looks damn fine today, the white shirt off-setting his dark skin, and he’s even sporting the paisley blue silk tie I bought him two Christmases ago. “You should get inside. It’s freezing.”

“I’m not going inside without him.”

“You catching pneumonia won’t make him show up any sooner,” Cam points out.

Two stragglers hustle toward us from the overflowing parking lot. I recognize the man, former plainclothes now Detective Conover, who worked the Alkaline case with me. He and his date both smile and nod as they pass us up the church steps.

“Seriously, Jo, come on. The ceremony’s supposed to start soon. And—”

“I can’t go in there without him, okay? This shit’s awkward enough for me already. Just…I’ll give him a few more minutes then I’ll come in. These things never start on time anyway.”

“Fine. I’ll just tell everyone…I’ll figure something out.” I nod at my friend who nods back before returning inside the warm church.

Dead. Jem is so fucking dead. And I get he’s saving people’s lives, I do. Most of the time I’m on the comms in our apartment, guiding him, literally watching his back on the surveillance feed. Hell, I’m the one who suggested he become the new Captain Moonlight. I should have kept my damn mouth shut.

It’s not as if we had tons of free time on our hands before. I had to cancel my fair share of dinners too. Being the figurehead of an international billion dollar empire with the board meetings, charity events, and general boring day-to-day business bullshit leaves little time to sleep let alone spend quality time with the man I love. Add to that Jem’s day job at the hospital, his research for his new virus project, and the city constantly being in peril from asshole villains, we’re lucky to spend a few hours a week face to face just being a damn couple. At least we make those few precious hours count. And we do work damn well together. Just last week we stopped an eco-terrorist cell from releasing a toxin in the meat packing district that would poison anyone who consumed the meat. If this were any other day I’d be on Doris Jr. helping him bring down Hexen, but this isn’t any other day. He needs to be here. He has to be here. He will be here. He will. Unless of course he’s…no.

God, why does my mind always go there? I have personally seen him survive multiple gunshots, being impaled by a rod, being beaten to a pulp, and an explosion. He has super-healing, super-intelligence, has a black belt in Judo and Karate, knows Krav Maga, not to mention the suit I commissioned for him is bullet, knife, and flame resistant. But every time I lose contact or he’s a minute late, that is my first damn thought.

I should be used to this by now. I knew what he was before I fell in love with him. Hell, I had a front row seat to that side of his life. I ended up in the hospital twice because of it, well three times if you count the plastic surgery needed to fix the scar on my face left by his brother. Not to mention the horrible minute when I thought he’d died that day. I lost my soul mate, my best friend to a supervillain, I couldn’t handle another man I loved dying for me.

We should have learned our lesson then. Jem killed Lord Nightingale right along with his psycho twin brother, and that should have been it. No more capes and cowls. No more kidnappings, attempted murders, and torture for either of us. Yeah, that lasted all of three months. The crime rate skyrocketed again, there was a supervillain attack every week, and despite his assurances he was content fighting crime behind our supercomputer Doris, I knew he was lying. It was in the way he’d stay glued to the computer and news. The way he’d stare out the window down at the city when he couldn’t sleep. How he spent more and more time in his dojo beating up the punching bag and dummy. He couldn’t help it. He’d fought the good fight for almost a decade. Before me, it was all he had. It was what got him out of bed. Something else we had in common. He couldn’t deny that part of himself, it was literally in his blood, and I know the longer he repressed that for me, the more he’d resent me down the road. So one night I shoved his new black and yellow costume at him, and told him I wanted him back before dawn. That was three months ago. Crime’s gone down twenty-two percent, two new villains are now rotting in Xavier Maximum Security Prison, they’ve just released the new Captain Moonlight action figure, and I’m freezing my ass off worrying about the man I love. Doing the right thing sucks balls.

Shit. He’s not coming. He’s not. I’m going to have to go in there and face all those people alone. All their whispering, their looks, their stares. How am I going to explain his absence? Fuck. Damn it. I need to get in there. Me being out here just looks worse. With a sigh, I start up the steps. Jem Ambrose you are—

Jennifer Harlow spent her restless childhood fighting with her three brothers and scaring the heck out of herself with horror movies and books. She grew up to earn a degree at the University of Virginia which she put to use as a radio DJ, crisis hotline volunteer, bookseller, lab assistant, wedding coordinator, and government investigator. Currently she calls Northern Virginia home but that restless itch is ever present. In her free time, she continues to scare the beejepers out of herself watching scary movies and opening her credit card bills. She is the author of the Amazon best-selling F.R.E.A.K.S. Squad, Midnight Magic Mystery series, The Galilee Falls Trilogy, and the steampunk romance Verity Hart Vs The Vampyres.

For the soundtrack to her books and other goodies visit her at www.jenniferharlowbooks.com

2 thoughts on “Tour: Fall of Heroes by Jennifer Harlow”