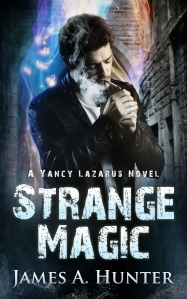 Yancy Lazarus is having a bad day: there’s a bullet lodged in his butt cheek, his face looks like the site of a demolition derby, and he’s been saran-wrapped to a banquet table. He never should have answered the phone. Stupid bleeding heart—helping others in his circles is a good way to get dead.

Just ask the gang members ripped to pieces by some kind of demonic nightmare in LA. As a favor to a friend, Yancy agrees to take a little looksee into the massacre and boom, he’s stuck in a turf war between two rival gangs, which both think he’s pinch-hitting for the other side. Oh, and there’s also a secretive dark mage with some mean ol’ magical chops and a small army of hyena-faced, body-snatching baddies. It might be time to seriously reconsider some of his life choices.

Yancy is a bluesman, a rambler, a gambler, but not much more. Sure, he can do a little magic—maybe even more than just a little magic—but he knows enough to keep his head down and stay clear of freaky-deaky hoodoo like this business in LA. Somehow though, he’s been set up to take a real bad fall—the kind of very permanent fall that leaves a guy with a toe tag. Unless, of course, he can find out who is responsible for the gangland murders, make peace in the midst of the gang feud, and take out said dark mage before he hexes Yancy into an early retirement. Easy right? Stupid. Bleeding. Heart.

“Move over Harry Dresden because there’s a new wizard in town. Yancy Lazarus a chain-smoking, take no prisoners S.O.B. with a heart of gold and a fistful of primal power. A stellar debut novel from James Hunter, the next big name in Urban Fantasy.” —Rick Gualtieri, Author of Bill the Vampire (The Tome of Bill)

The piano keys bobbed and danced under the pressure of my fingers. Music—low, slow, and soulful—drifted through the club, merging and twirling with wandering clouds of blue-gray smoke. So many places have no-smoking laws these days, it seems like there’s nowhere in the country where a guy can take a drag from a cigarette in peace. Everyone is so worried about their health, they make damn sure you stay healthy by proxy.

Not Nick’s Smoke House, though. Nick’s—like some rare, near extinct animal—is the kind of bar where you can die unmolested by laws or ordinances. You can burn yourself up with cancer, drown yourself into liver failure, or binge on a plate of ribs until a heart attack takes you cold, and no one will say boo. And you can die to music here: the beautiful, lonely, brassy beats, of the like only ever found in New Orleans.

The house band was on a break, so I sat thumping out an old Ray Charles tune in the interim while I watched the man standing offstage in a pool of inky shadow.

I’d never met the guy before, but I instinctively knew he was looking for me, or rather The Fixer—a shitty alias I’ve been trying to ditch for years. It was in the way he stood: chest forward, back straight, arms crossed, chin outthrust. He was a man used to intimidating others, used to being obeyed. In short, he was a thug. A thug sporting an expensive suit, a three-thousand dollar watch, and a pair of loafers that probably cost more than most people paid on rent. At the end of the day, though, he was still just a thug—somebody else’s trained pit bull.

I don’t know why, but thugs are always looking for The Fixer. Either they’ve got something that needs fixing or they’re looking to fix me. I didn’t know whether this guy wanted option A or option B, but I figured he’d get around to it in his own sweet time. So, instead of tipping my hand prematurely, I continued to pound out melodies on the black and whites. My Ray Charles faded out, and I started up a gritty, ambling version of Meade “Lux” Lewis’ famous “Honky Tonk Train Blues.”

My left hand hammered out the thudding, rhythmic, rock-steady pulse of a driving train pushing its bulk across the rolling open space of some forgotten Midwest wilderness; the bass notes offered a mimicry of the ebb and flow of pumping gears. My right hand flitted across the keys, touching down here and there, sending up a rusty whistle blowing in the night. The dusty clatter of track switches being thrown. The braying of hounds, while bullyboys searched for stowaways. If there was ever a song to make a man dance his way onto the boxcar of a rolling train, it was this funky ol’ honky-tonk rhythm.

I let the beat roll on, hoping the thug would hop and jive his way right out of Nick’s Smoke House and out of my life, no harm, no foul. Though a whole helluva lot a people think of me as The Fixer, really I’m just an old rambler trying to get by and enjoy the time I have on this spinning little mud ball. All I wanted was for this overdressed clown to walk away and leave me be.

The man in the black suit just glared at me like I’d offered him an insult, and I knew then things would not end well between us. Still, I mostly ignored him. I should’ve been worried, but I wasn’t.

I’ve been around for a good long while, and I don’t scare easy.

After what felt like an age, the hulking suit stepped up to the stage and into a pool of soft amber light, illuminating his features for the first time. He was enormous, six and a half feet of pro wrestling muscle, with a pushed-in nose and military cropped blond hair. His face was a mosaic of scars, though the thick tissue on his knuckles put them all to shame. One meaty paw lifted back a coat lapel, revealing the glint of chromed metal: a Colt 1911.

A Colt 1911 is a big gun, not the kind of thing a person normally chooses as a concealed carry. The things are too large to conceal easily, and they can be awkward to draw on the fly, so he probably wasn’t here to assassinate me. A pro assassin would never have used something as ostentatious and conspicuous as this McGoon’s 1911. A hitter would’ve chosen a sleek, nondescript .22. The kind of gun that’s easy to hide, would go off unnoticed, get the job done without much mess, and could be disposed of in a dumpster somewhere. This guy’s choice of weapon told me he was intimidating muscle, but likely better with his fists than with his piece.

“Yancy Lazarus?” he asked with a low voice like grating cement. “You the guy who fixes things?”

I could’ve denied it, but the guy had found me fair and square, so it was safe to assume he already knew the answer. I nodded my head a fraction of an inch. That was all. I went right on playing as though I hadn’t noticed his veiled threat or didn’t care. Now don’t get me wrong, I’m not suicidal and I’m not a pompous jackass—at least that’s not how I see myself—but I knew I could take this guy. I had an edge, although Macho Man Hulk in the other corner didn’t know it.

I can do magic and not the cheap kind of stuff you see in Vegas with flowers, or floating cards, or disappearing stagehands. People like me, who can touch the Vis, can do real magic. Although magic isn’t the right word: magic is a Rube word, for those not in the know, which is precisely why we who practice call it the Vis in the first place. Vis is an old Latin word meaning force or energy, nothing fancy about it.

There are energies out there, underlying matter, existence, and in fact, all Creation. As it happens, I can manipulate that energy. Period. End of story.

Hey all, my name is James Hunter and I’m a writer, among other things. So just a little about me: I’m a former Marine Corps Sergeant, combat veteran, and pirate hunter (seriously). I’m also a member of The Royal Order of the Shellback—‘cause that’s a real thing. And, a space-ship captain, can’t forget that.

Okay … the last one is only in my imagination.

Currently, I work as a missionary and international aid worker with my wife and young daughter in Bangkok, Thailand. When I’m not working, writing, or spending time with family, I occasionally eat and sleep. Strange Magic is the first novel in the Yancy Lazarus series—the third, full-length novel, Wendigo Rising, just released on November 3rd, 2015.