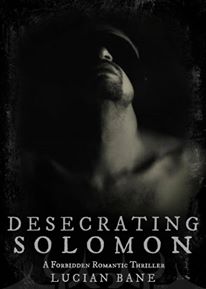 This book contains elements that may be disturbing and offensive. Please read with caution if you are triggered by events depicting violence and various forms of abuse.

Evil keeps a formidable schedule in Weston, West Virginia. Every seventh year, spirits from the town’s abandoned insane asylum seek worthy souls to command. But this seventh year, a desecration unlike any before is scheduled to ravage the town. And Solomon Gorge is lured to the harrowing event by the screams of Silence.

Silence focused her mind, bringing the erratic race of her pulse back into her control. Again. She was finally there. In The Hallower. She didn’t permit herself to look about but her peripheral said she’d been wrong about the most holy chamber. The torture devices and horrific tools she’d imagined hanging from the ceiling and walls did not exist.

Six years. She could hardly believe it had passed. Six years as ‘Silence’ ended today. No, six years of silent Contemplation ended today. But it really didn’t end. There would never be a time when she didn’t contemplate what came next. And what would her new name be? She never permitted herself the blasphemy of trying to guess. Today she’d know.

She carefully slid her gaze to the single entrance leading in. A small door made of thick slats of wood, held together by decorative black metal. The entire room was black—walls, ceilings, floor—all a rough stone painted a shiny looking onyx. And empty. Except for the single slab of granite in the shape of a hobbit table where she sat in her ceremonial graduation gown. It reminded her of a wedding dress.

Would Master be the one to usher in the final phase? Her stomach clenched in excitement and she immediately calmed the fleshly rebellion. She secretly hoped he did. She’d never met the Order’s Queen but once, and even then Silence was not permitted to look upon her as an unlearned runt.

Silence was used to Master’s ways, even though all feared him. The Dark Legend of their Order had trained her personally in the most Holy arts of pain and fear. Any fear borne outside of her Master’s care was destructive—that was one of her first lessons. There were good fears and bad. The bad fears were counterproductive to the Order, the good fears protected it. And Holy Fear with pain were gifts she received directly from her Master’s hands. And only her complete submission provided the divine covering required to fulfill her role as the Queen’s chosen Redemptrix.

Her calm insides jolted at the clang of the outer door leading to The Hallower. She faced straight ahead in deferring obedience, eyes cast to the floor. The Hallower door opened next and her peripheral said the entirely nude form was indeed Master. She let out a silent breath of relief.

He shut the door. One metal bolt clanked… then another… then another. Her heart hammered in her ears despite her steady breaths. It was always this way. No matter how practiced she was with Master’s training, her body knew. Muscle memory always braced for sure impact of some sort.

“Sweet Silence,” he said when he stood before her.

She stared at his hardened phallus, leaning to place the customary kiss on the butterfly tattoo wrapping its length. He stopped her with a pointer finger on her forehead.

Again Silence braced, mostly in confusion. She didn’t remember a single time when he didn’t require the Butterfly Kiss. She still remembered the day he had the vision to get the tattoo. The butterfly on the phallus symbolized that the lost would be ushered to heaven’s door by the seed of Master. During her Silent Contemplation she’d marveled over his interpretation, glad that he seemed to be getting some of her gifts.

She hoped he got all of them.

“You look beautiful in your graduation gown, Silence.” He stroked that same finger along her face, beginning with her temple. Her mind flashed with past disciplines he’d put her through. There was no part of her body he’d not trained in some way, for some sacred reason.

She listened closely to his unsteady breaths, thick with the scent of fermented juice. “Are you nervous?”

The several grunts followed by strained groans told her he was having divine revelations. “Six years of Silence to usher in the final phase.” The withered words came with the glide of his finger over her lips, lingering long enough for her to know what he wanted. But when she parted her lips to suck, he drew it away, bringing another surprise. “Are you ready, little one?”

“Yes, Master.” The bad fears made her breaths shallow as she struggled with old flight or fight instincts.

Why wouldn’t he let her suck it? It was always the not knowing parts that got her, it always was. What he would do each time. He liked surprising her. It had become an unspoken duel between them—her to anticipate, and him to be unpredictable.

A gasp escaped her as she fumbled with the reigns on her control. Master was the one person she would always fear. She was supposed to fear him and only him. Fearing him was allowed, it was good, it was expected, demanded.

Think of the Hallowing Ceremony. Graduating to the next phase. Six years of silence is over.

Sudden terror hit her as she remembered. The dream. The vision for her new name. There had been none.

“So much fear, little one.’His voice croaked with disappointment as he tilted her face up with that same finger, now under her chin. “I am sure you’re eager for your new name.” He began a slow trek to the right of her, his finger gliding off as he went. Silence refused to allow her gaze to stray from straight before her. He’d had the dream? The vision? “I too, am ready to hear it.”

He’d not. Terror raced back in and she swallowed at what this might mean. “There was none.” Her voice rang out with a strength despite the quiver in her gut.

His deep low chuckle behind her, tickled along her spine. “I know,” he whispered, his mouth suddenly at her ear. “Because I was given the dream this time.”

The beat of her heart became a wallop in her chest. Breathe, Silence.

“I’m sure you’re eager to know it?” he said lightly, slowly coming back around on her left now.

“I am excited to learn it.”

“And I’m excited to tell you.” He came to stand exactly before her again. Silence gripped her dress in tight fists as he placed his hands on either side of her head. He pulled her to his phallus, moving his hips side to side lightly. She waited for his direction, knowing not to engage until he communicated firmly. “I had a vision of your new name, little one. A vision of a hand writing on the wall next to my bed.” The tip of his penis stroked errantly over her cheek and lips, meandering and without purpose. “Do you know what it said, sweet angel?”

She shook her head only barely. “No, Master.”

His fingers suddenly bit down in her hair, pulling harder than he’d ever done before. She fought to look him in the eyes the way he always insisted when milking for his essence. But he shoved so far in so quickly and she hadn’t had time to relax her throat, already it burned and hurt.

“Talk to me Silence. One last time before you leave,” he growled, grabbing the hair on top of her head while he pinched her nose shut. “Tell Master how much you will miss him. How you will never forget him. How you will only think of him,” he hissed, pounding his penis harder against her throat.

Silence struggled to give him what he wanted, but her body refused, it always did.

“Tell me!” he ordered between grunts and thick groans.

She tried again. She tried so hard.

His fist shot down and slammed into her forehead. A familiar numb buzzing filled her skull and ears. “Tell me Silence, tell me how much you’ll miss me while you fuck our sacrifice!”

She did it in her mind. She screamed until she had no more breath. She screamed as loud and hard as she could, like he wanted her to, but it came as silence. Something had broken inside her years ago. She couldn’t remember the exact day, she just knew it had. She could no longer scream. It was as though she’d forgotten how or lost the ability. No matter how much he beat her or hurt her body, her mind disconnected from everything and she couldn’t.

She could feel the pain but she was trapped in silence. Just like her name.

Please take the warning seriously for this one. As you can tell from the excerpt, this kind of story isn’t for everyone. The violence and abuse are inescapable facets of the story.

I have to say, this book was not what I expected. The blurb made it sound like a paranormal with the talk of spirits, but the book definitely falls within the thriller  genre. I also see elements of mystery and even horror (the non-supernatural kind) present as well.

I don’t particularly care for depictions of abuse (in fact, it makes me fighting mad to think people endure horrible circumstances at the hands of others) but I can overlook disturbing scenes when it works within the constructs of the story. In this case, it is essential to understand the depravity the main character, Silence/Chaos, is subjected to. The sexual abuse, beatings, mental abuse and brainwashing she endures is have shaped her character and in order to understand what motivates her to carry out the directive handed down by the man known as Master we have to see the torment she endured.

The character development of Solomon, is displayed more by his words and actions. Everything he does or says is indicative of his nature. His past is relayed in snippets without a whole lot of details, but the information given is enough to lend insight to the type of person he is and his actions with his charges reinforce the goodness of his character.

As for the story itself, I found it compelling and intriguing. I was sucked in and despite stomach turning violence, I couldn’t put it down. I give this book five stars.

Now I will warn you that it does contain a cliffhanger–which was also unexpected–but I will be anxiously waiting to see how this story ends. 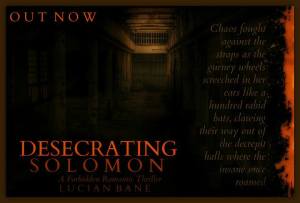 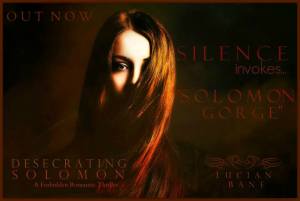 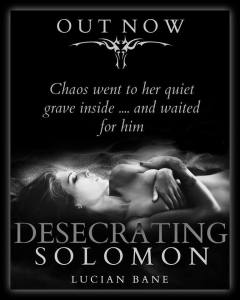 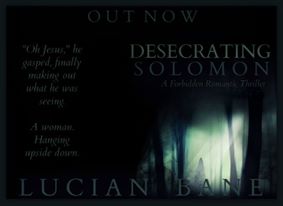 No Mercy: A Darker Continuation:

Beg For Mercy: A Dark Conclusion

One thought on “Tour: Desecrating Solomon by Lucian Bane”